This is the XFCE Community Edition for Linux Mint 5, codename Elyssa, based on Daryna and compatible with Ubuntu Hardy and its repositories. 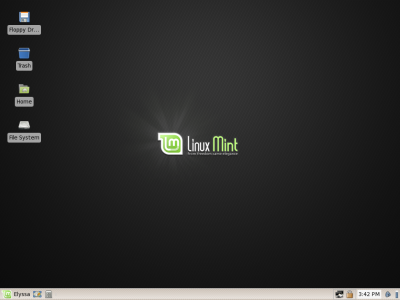 All mint applications were improved in Elyssa. For the list improvements of mintUpdate, mintUpload and mintInstall, read the Elyssa Main release notes.

XFCE's mintDesktop has a new layout and some more options to customize your desktop.

XFCE's mintDesktop also enables/disables Compiz Fusion or even adds it to auto start on login. 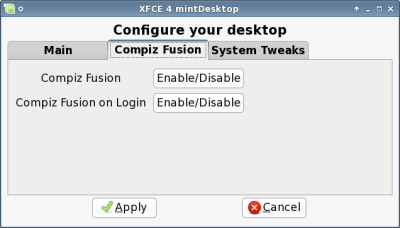 XFCE's mintConfig has been updated for the default applications in Elyssa. 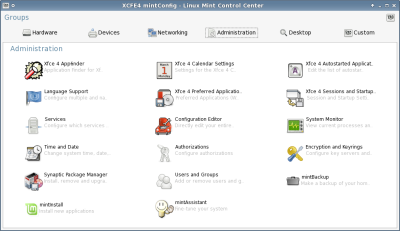 XFCE's mintConfig also allows you to change the Groups position.

Pressing the Print button now will take a screenshot of the desktop.

You can now check the MD5 signature of an ISO file by right-clicking on the file and by selecting "MD5 Checksum". 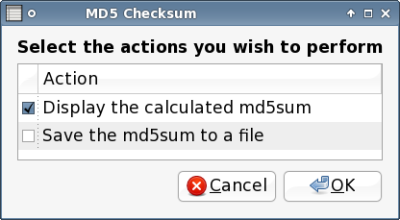 You can now open a folder as root by right-clicking on that folder and by selecting "Open Folder as root". This is a powerful but also a dangerous feature. A warning is displayed while using this feature. 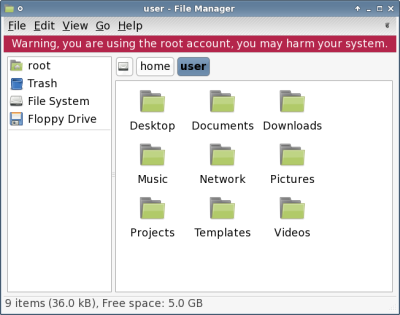 You can now install any True Type font by right clicking the .ttf file and selecting “Install .ttf Font”. It will check to see if the font is already installed and display a message if it is. It can install to the current user(User option) or to all users on the current install(System). After the font is installed just restart any application you want to use the new font in. 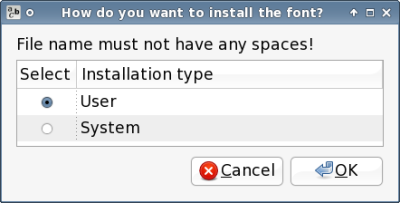 Terminal now has colors and fortunes said by a koala, a moose, or even Tux himself! (Don't worry, if you don't like this you can turn it off in mintAssistant, in fact it's one of the first thing you'll be asked by Linux Mint once it's on your hard drive.). 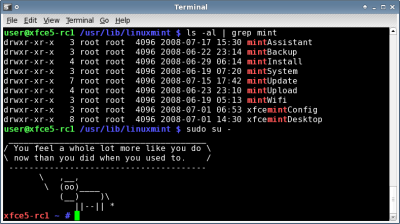 MintUpdate was refactored and its memory usage was drastically reduced. On some systems the amount of RAM used by mintUpdate after a few days went from 100MB to 6MB.

Elyssa comes with kernel version 2.6.24 which features a brand new scheduler called CFS (Completely Fair Scheduler, Read more). The kernel scheduler is responsible for the CPU time allocated to each process. With CFS the rules have changed. Without proper benchmarks it's hard to actually tell the consequences of this change but the difference in behavior is quite noticeable from a user's point of view. Some tasks seem slower, but overall the system feels much snappier.

Linux Mint is growing and acquired a second dedicated server. The Linux Mint repositories (starting from Elyssa) are now hosted on a distinct server so updating and installing mint packages is now much faster.

If you're behind a proxy you'll be happy to know that Ubuntu improved the Ubiquity installer. You can now define your proxy settings in the advanced section.

Upstream improvements from Ubuntu include the addition of an easy-to-use command line firewall called "ufw" and the policykit framework which makes it easy for applications to restrict some of their features depending on the permissions assigned to users.

Printing was improved in Ubuntu Gutsy and these improvements are coming into Linux Mint 5 Elyssa, with the exception of the Print-to-PDF feature which is kept as it was in Daryna.

The default set of GTK widgets used in Daryna was called MurrinaIndustrialSM. Subtle changes and refinements were made to it. Sliders now use the Clearlooks engine, scrollbars are now white and come with handles, columns headers were made glossy, dotted lines were added in tables and the roundness level was decreased slightly. Overall it looks pretty similar to Daryna and you might not notice the difference until you actually look into it. It's all about attention to details though and we're quite happy with the improvements we made on this. The colors are also configurable now so that's probably great news for people looking for an easy way to make Linux Mint a little greener.

The default theme also looks similar to the one used in Daryna but with a more professional look. Grub, usplash, gdm, and the default wallpaper look consistent and all use artwork based on "Carbon v5", a look and feel inspired by Daryna and designed by a new and great artist called Jernau. Isolinux uses "Global Domination", also from Jernau.

Emerald(Compiz Fusion themes) now comes with a new default created by cathbard and modified by merlwiz79.

All Mint tools were internationalized and are being actively translated by the community.

Security warnings and major announcements will also take place on the start page which acts as an information gateway between the development team and the Linux Mint community of users.

To help add translations you need to look in the forums under Translations.

Linux Mint 5 Elyssa is supported by CNR.com which features commercial services and applications which are not available via the traditional channels.

The Software Portal introduced in Linux Mint 4.0 Daryna is receiving more focus as it represents the easiest way to install applications. About 10 times more applications will be made available for Linux Mint 5 Elyssa.

The way we handle repositories has changed and we're now in a position to take advantage of the sections introduced in Linux Mint 4.0 Daryna. For instance, we will actively import packages within the "import" section. The community is also allowed to provide packages for the distribution which are added to the "community" section (Note: The community section is commented out by default in /etc/apt/sources.list).

The community section is disabled by default and can be added by opening Synaptic and checking the box under enabled.(Note: the settings to do this is under Settings → Repositories)

8. Changes in the default software selection

A new Mint tool called mintBackup was developed and added to Elyssa. This tool provides an easy way to save the content of your home folder into a single .backup file. You can then restore this content later on or somewhere else by double clicking on it (provided mintBackup is installed on the target system).

Sunbird was replace by the lightning-extension for Thunderbird.

Bluetooth-gnome was added for bluetooth support.

Vinagre was added as the Remote Desktop Viewer.