This is the KDE Community Edition for Linux Mint 5, codename Elyssa, based on Daryna and compatible with Ubuntu Hardy and its repositories. 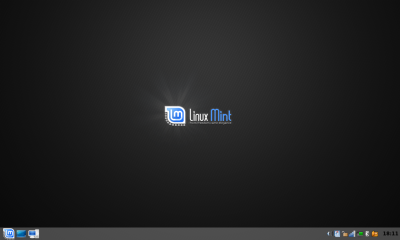 The packages and kernel were updated to be on par with Ubuntu 8.04.1.

MintUpdate was introduced in Daryna and quickly became one of the most popular tools on the Linux Mint desktop. It came to our attention that a lot of people weren't aware of how it worked internally (for instance, the difference between its user and admin runtime modes). For this reason we developed an information screen from which the active logs can be read, and the runtime mode and process id can be seen.

The auto-refresh feature is now more flexible. You can configure it to the minute but now also all the way up to a year.

When you log in and mintUpdate starts in user mode it now checks for an Internet connection. If none is found it waits for 30 seconds before retrying to connect and eventually reporting the lack of connection. This new feature is particularly interesting for people whose connection to the Internet is activated at log in and sometimes after mintUpdate is started.

You can now manually refresh mintUpdate, and directly access its preferences and information screens by right clicking on the icon in the system tray.

.mint files can be quite complex as there's almost nothing you can do in a terminal that a .mint file can't do. In practice though, 99% of the .mint files present in the Software Portal consist in describing the installation of an application using APT. Most of these files describe the installation of only one package, and in most cases this package is present in the default repositories. In Daryna mintInstall used to backup the local sources.list, define its own, and then restore things as they were. This resulted in APT being told to update twice. In Elyssa, the mintInstall client checks if the packages are present within the repositories defined on your system, if they are the client gives you the choice of whether you want to use your sources.list ("local repositories") or the one coming with the file ("default repositories"). The default selection is "local" and as it basically saves 2 APT updates the installation of the application via mintInstall is consequently much faster.

The search dialog now supports the GetDeb.net software portal. GetDeb uses raw DEB packages and no meta-information so downloads can be slow and dependencies (if any) won't be solved automatically, but it features packages that aren't available anywhere else on the Internet. The portal can be searched directly from mintInstall and the installation of the .DEB packages is handled by GDebi.

The search dialog now also supports APT itself. This is a convenient shortcut as mintInstall is much lighter than synaptic and more user friendly than the APT command line utilities. From mintInstall you can now search for a particular package, show its description (which also lists the files it contains) or even install it.

Improvements were made to the layout and the navigation within the Linux Mint Software Portal. A batch .mint maker was developed and the portal should feature about 10 times more applications than it did for Daryna. Applications are also organized in sub-categories and almost all of them now come with a screenshot.

Release-specific information was moved to a new package called mintsystem, so mintInstall is now release agnostic. This should make it easier for future versions of mintInstall to be backported on older releases or even used on compatible distributions (all distributions directly or indirectly based on Debian Testing or Debian Unstable).

MP3 could be decoded out of the box in Daryna. In Elyssa you can now also encode in this format without having to install any extra codecs.

Making things easier on the desktop means you don't need to rely on the terminal that often. But don't get us wrong, we do like our terminal! It's faster, more to the point, and the commands (not like the buttons and menus in graphical interfaces) are the same no matter what language you use. With each release of Linux Mint we improve the user experience with the terminal and this time we've added two things...

... more colors (see how the results of the grep are highlighted and how user and root modes use green and red so you know exactly in which mode you are?) ...

... and as it wasn't enough for the terminal to show light-hearted fortunes, we now have them said by a koala, a moose, or even Tux himself! (Don't worry, if you don't like this you can turn it off in mintAssistant, in fact it's one of the first thing you'll be asked by Linux Mint once it's on your hard drive.).

Mintupload's email feature was removed and replaced with a "Copy" button, which simply copies the shared URL to the buffer.

MintUpdate was refactored and its memory usage was drastically reduced. On some systems the amount of RAM used by mintUpdate after a few days went from 100MB to 6MB.

Elyssa comes with kernel version 2.6.24 which features a brand new scheduler called CFS (Completely Fair Scheduler, Read more). The kernel scheduler is responsible for the CPU time allocated to each process. With CFS the rules have changed. Without proper benchmarks it's hard to actually tell the consequences of this change but the difference in behavior is quite noticeable from a user's point of view. Some tasks seem slower, but overall the system feels much snappier.

Linux Mint is growing and acquired a second dedicated server. The Linux Mint repositories (starting from Elyssa) are now hosted on a distinct server so updating and installing mint packages is now much faster.

All Mint tools were internationalized and are being actively translated by the community. 11 languages are already fully supported. The most important tools (mintInstall, mintUpdate, mintMenu) already support 21 languages. Members of the community also translate the User Guide, which is already available in 4 languages.

The Firefox start page now brings news directly from the development team, links to the release notes and to the User Guide. Security warnings and major announcements will also take place on the start page which acts as an information gateway between the development team and the Linux Mint community of users.

Linux Mint 5 Elyssa is supported by CNR.com which features commercial services and applications which are not available via the traditional channels.

The Software Portal introduced in Linux Mint 4.0 Daryna is receiving more focus as it represents the easiest way to install applications. About 10 times more applications were made available for Linux Mint 5 Elyssa.

The way we handle repositories has changed and we're now in a position to take advantage of the sections introduced in Linux Mint 4.0 Daryna. For instance, we actively import packages within the "import" section. The community is also allowed to provide packages for the distribution which are added to the "community" section (Note: The community section is commented out by default in /etc/apt/sources.list).

7. Changes in the default software selection

A new Mint tool called mintBackup was developed and added to Elyssa. This tool provides an easy way to save the content of your home folder into a single .backup file. You can then restore this content later on or somewhere else by double clicking on it (provided mintBackup is installed on the target system).

If you're behind a proxy you'll be happy to know that Ubuntu improved the Ubiquity installer. You can now define your proxy settings in the advanced section.

Upstream improvements from Ubuntu include the addition of an easy-to-use command line firewall called "ufw".


Install with an old home partition